You don't have any saved vehicles!

Look for this link on your favorites:

Once you've saved some vehicles, you can view them here at any time.

You Are Here: Home » Mercedes-Benz History

Even more than its meticulous engineering, Mercedes-Benz is defined by its continuous innovation. Since inventing the car in 1886, we’ve simply never stopped reinventing it.

What begins as a breakthrough becomes the standard for every car on the road.

Mercedes-Benz has a history of making history. Since the first car, Mercedes-Benz has set the pace for what all cars might someday become. With an ongoing stream of firsts in safety, performance and driving enjoyment, it’s an ever more exciting roadmap to the future. And while there’s a neverending roster of new achievements, there’s only one reason the world’s first automaker remains first in innovation. Carl Benz said it best: “The love of inventing never dies.”

Among the features of the
first car to wear the Mercedes name is its closed cooling system,
a highly efficient design made possible by the texture of its
radiator.

The Benz Special Touring Car
is first to employ four valves per cylinder to improve both
performance and fuel consumption.

A compressor driven by the
engine noticeably increases the power of several Mercedes models
by pressurizing the fuel-air mixture.

In 1886, Carl Benz is awarded
German patent number 37435 for a three-wheeled, self-propelled
“Motorwagen”. With a rear-mounted single-cylinder engine,
the first automobile forever changes the way people move, and
sparks a legacy of innovation that continues to this day. 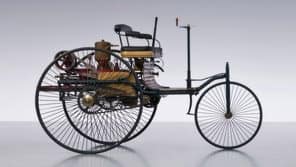 i The first female driver.
“Bertha Benz, Carl’s wife, decided to help promote his invention by taking it on a 120-mile tour without his prior knowledge. She also served as her own mechanic on the trip.”

The first diesel passenger
car, the 260D, uses about 30% less fuel than its gasoline
counterpart, and does so without the maintenance of ignition
components.

Designed to help prevent the
doors from opening in an accident, this patented, extremely strong
door latch is the first of its kind.

The Mercedes-Benz 170 features the first-ever fully independent suspension, which allows each wheel to respond individually. Along with a new hydraulic braking system, the 170 sets new performance and safety benchmarks that remain the gold standard today.

i Independent thinking, inspiring control.
“Precise wheel control is a guiding principle of many later handling and comfort breakthroughs, from the first 4-wheel independent suspension on an SUV (the original M-Class), to the highly advanced Active Body Control (ABC®), to the elegant simplicity of AGILITY CONTROL®.” 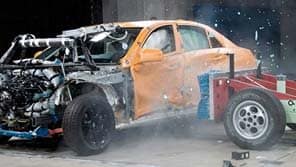 For the first time, development of every new Mercedes-Benz includes an increasingly rigorous regimen of crash-testing. This vital learning tool was initially performed outdoors.

On the first SL to offer an
automatic transmission, an ingenious notched layout facilitated
selection of all four forward gears without a pushbutton release.
It remains an industry standard.

One of many evolutions of the
crash test program, the “partial overlap” barrier crash
more accurately simulates the concentration of forces in
real-world collisions.

A concept first unveiled in 1970, ABS helps the driver retain steering control under heavy braking by preventing wheel lockup. It remains both a milestone in automotive safety and a cornerstone, with the ability to individually brake wheels serving as a fundamental element of countless future breakthroughs.

i Brakes that accelerated progress.
“Single-wheel braking can also generate corrective rotation of a car about its vertical axis. This fundamental ABS benefit has since been put to use in innovations from electronic traction control and stability control to Active Lane Keeping Assist and Active Blind Spot Assist.”

Long before other automakers,
Mercedes-Benz removes these eco-unfriendly chemicals not just from
its air conditioning systems but the entire manufacturing process.

A breakthrough in automotive
electronics, the networking of numerous components allows more
precise and rapid control, along with new levels of feature
interaction.

Perhaps the most important
safety breakthrough since the air bag, ESP® helps maintain control
in corners and evasive maneuvers. It is now required by law on all
cars.

Changing the tide in both
convenience and antitheft protection, the compact SmartKey uses an
electronic code to unlock and start the car, rather than a
mechanical lock.

Introduced as Tele Aid and later enhanced under the mbrace® banner, this continually advancing suite of security, convenience and navigation features can connect drivers to their vehicle or to Mercedes-Benz Customer Assistance via smartphone, computer or three buttons inside the car. In 2012, the newmbrace®2™ brought the Internet into the car, with new apps and expanded remote and in-car features.

i Your world, in motion.
“Withmbrace®2, you can easily navigate to places you find on Google, Yelp or even Facebook friends’ check-ins, all from your car.”

A groundbreaking system that can help prepare the occupants for an accident before it happens, PRESAFE® can detect that certain types of collision might be imminent. In the precious moments before impact, it can snug the front seat belts and adjust the front head restraints to help optimize the effectiveness of the restraint systems.

i Safety first, when seconds count.
“PRESAFE® responds when active safety systems like ESP® are fully engaged but not restoring control. If it senses a severe sideways skid, it can even close the windows and sunroof. And if no accident occurs, the seat-belt tensioners reverse, you reopen your windows, and continue on your way.”

2006 DISTRONIC PLUS® with PRESAFE® Brake

Even when not using the
cruise control, it looks ahead for stopped traffic, alerts the
driver, and even starts the braking process to help reduce the
speed of impact.

After measuring over 70
parameters in the first few minutes of a drive, this innovation can
help detect signs of drowsiness and audibly alert the driver to
take a break.

i Added sensitivity, no added sensors.
“Remarkably, ATTENTION ASSIST® operates entirely from sensors already in a Mercedes-Benz. It cleverly tracks and compiles input from existing systems, from steering behavior to a lack of interaction with dashboard controls, to determine that a driver might be getting drowsy.”

This next-generation system in the 2017 E-Class shares critical information with other vehicles equipped with the technology in order to help warn of potential danger – such as slippery road conditions, fog, heavy rain, and even accidents and break-downs – earlier than ever previously possible. Someday millions of cars could include this kind of technology, making driving safer and smarter than ever.

i A visionary enhancement to vehicle perception
“Automated vehicle communication represents an important evolution in our ability to detect danger on the road: It allows equipped vehicles to communicate critical information by means of a cloud-based system. It works in addition to vehicle cameras and sensors – as well as the driver’s own senses – to amplify our awareness of driving conditions.”

If a collision is imminent, this
world-first system emits a pink noise to trigger the human ear’s natural
protection response in order to help minimize hearing damage from the noise
of the collision.

In the event of a side collision,
this world-first system rapidly inflates the outer seat bolster to help shift
the driver’s or front passenger’s bodies away from the impact.

This radar-and-camera-based system helps steer
the vehicle during a lane change when it detects that the lane is unoccupied.

How you’ll see even more of the world from your Mercedes-Benz.

You don't have any saved vehicles!

Look for this link on your favorites:

Once you've saved some vehicles, you can view them here at any time.